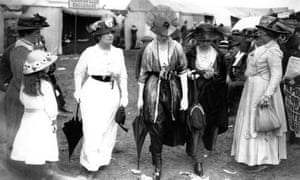 A group of women at Ascot wearing the latest fashions, May 1914. Photograph: Central Press/Getty Images

The century of costume that is being exhibited by Miss Dawson, of Chelsea, at the Olympia Exhibition shows some extraordinary coincidences in the development of dress past and present.

Rather more than a hundred years ago, for instance, the male element predominated in feminine attire. Women wore tall hats, high collars, waistcoats, and skirts tight enough to suggest the trouser line. Almost exactly a hundred years later the coat and skirt, with its stiff-collared blouse and hard sailor hat, was compulsory for the young woman with any regard for fashion.

These revolutionary modes of the 18th century were followed by the classic styles of the Empire, and “line” became everything. Dresses of the period contained the smallest possible amount of stuff; round-toed shoes, tied on with ribbons, were a not unimportant item of attire. We also have only just discarded Empire fashions – more’s the pity, – and the sense of line which has distinguished the last five years seems in the fashion of the moment to have run amok.

Our round-toed shoes tied on with ribbons, on the other hand, have come in with the tango, a little later than rather than coincidental with Empire fashions. Again, the Empire fashions were followed by increasing fullness in the skirt, which corresponds with some exactness to the pannier tendency of to-day. This fullness gradually developed into the crinoline and gradually subsided into the bustle. It is curious to remember that women who did not conform to the bustle were regarded as eccentric, if not worse. 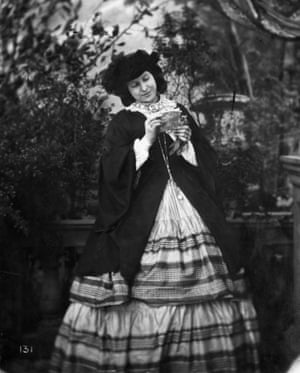 The present-day fashions seem to point for the moment to the bustle rather than to the crinoline. But so far dress development has followed with such extraordinary exactness the course of a hundred years ago that there seems no special reason to suppose that it will deviate now from its appointed course.

Where it may differ to a certain extent will be rather in the direction of variety. Formerly women wore crinolines practically all the time, whether in paying an afternoon call or in playing games on the lawn. To-day most women change their clothes two or three times a day at least, and their varied occupations and pleasures exact a corresponding variety in clothes.

Thus, while it seems likely that the crinoline will prevail even against the protests of the strong-minded, there is comfort in the thought that it is not likely to be worn on the links or in the office or in the gymnasium.